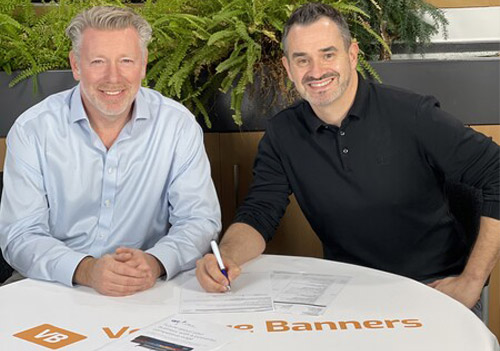 Venture Banners has invested in two h5 EFI VUTEk printers from CMYUK. These superwide hybrid roll to roll/flatbed UV LED printers will be utilised for the company’s point of sale work.

Regarding itself as an EFI VUTEk house, the company has been buying these printers from CMYUK since 2011. Venture Banners was set up in 2009 by Scott Conway and Wayne Bodimeade but for the first two years was outsourcing all its print. However, after being let down by its main printing supplier and prompted by calls from Robin East, CMYUK’s Group Sales & Marketing Director, Scott and Wayne went to Brussels to view the EFI VUTEk GS series of printers.

“It was just ridiculously clear at the time that EFI had really got it sussed. The  printers were spectacular and they still are. What we also really like is that we’ve got really good backup with these printers,” says Scott.

“What we’re going to do,” continues Scott, “is to keep two of our VUTEk GS  printers: one will be used to print  big banners, the second will act as a backup, while the third will be dismantled for parts. The new h5s will be used for our Point-of-Sale work, so we’ll be outputting  Correx, Dibond,  rigid substrates and other POS materials.”

The h5s will provide the company with the ability to print direct to board, up until now it would print onto self-adhesive vinyl, then applying it to a rigid substrate with a Rollsroller flatbed applicator.

“When we were visiting CMYUK’s demo centre in Shrewsbury we did some direct test prints and we worked out that we could do in 20 minutes what takes us two hours at the moment,” says Scott.

While the h5s have updated the company’s production capabilities – extending capacity and improving throughput speed – they also enable the use of new substrates and the opportunity to access new markets.

“We need products that ignite our customers imagination and entrepreneurial flair and perhaps more importantly that they can make a decent buck on. We may think about offering very short-run bespoke packaging and boxes for customers, or perhaps Ultraboard recyclable stands, which will be easy for us to print with the h5s, and we have all the technology for the finishing in-house,” he says.

The company is well aware of the arguments to diversify into sectors such as home décor, interiors and textile printing for fashion. However, what makes this company successful is volume printing.  Frequent material changes and lower runs on industrial sized machines result in a great deal of material wastage – that can significantly eat into job profits.

While volume is still the leading factor, h5 printers are designed to minimise waste. “Where in the past we were dealing with a 1- 1.5m worth of waste when we loaded up, this is reduced to 40mm with the h5, which all of a sudden opens up new materials to us,” says Scott.

The h5 prints in four or eight colour modes plus white, and up to a 9-layer capability in a single pass. It features a cold cure energy saving UV LED that allows for the output of thin or tricky materials that are unable to withstand the heat impact from standard mercury arc UV lamps and Latex technology.

Venture Banners has recently purchased a 21,000 sq. ft production space and installed 176 2 x1m solar panels. “These generate a great deal of the power that we use,  but we’re going to see energy savings with the h5s as they use LEDs rather than the mercury lamps, so the saving on electricity is going to be quite dramatic,” he says.

Despite closing for a month at the start of the Pandemic, the company has navigated itself successfully through.  “We survived, we didn't have to take any bounce back loans, which we're very proud of. We just battened down the hatches, furloughed who we needed to furlough and worked our asses off to keep the business on an even keel,” says Scott.

Both Scott and Wayne have enjoyed a close and trusted relationship with CMYUK over the years. Says Scott: “We really get on well with Robin and Jon {CMYUK Group Finance and Operations Director}, we value their opinions because they know what they’re doing. Watching the growth of CMYUK has been fascinating and I think they would say the same about us.”